Posted at 20:27h in Feng Shui, Intentions by Carole Hyder

It happened to me again, as it has so often in the last few years. I was in a social setting, chatting with someone I hadn’t seen for a while, when I felt a tug on my sleeve.

Standing before me was a woman with whom I’d consulted on a Feng Shui appointment a year ago. She began to tell me yet another story of how an intention moved into reality. This time I was blessed with the news of her wedding date. She assured me that Feng Shui helped to bring about this long-awaited event. A week after our appointment, she hung a crystal with a nine-inch pink ribbon in the Partnership area of her bedroom. Within two months, her husband-to-be showed up on the scene. In truth, this would be the fourth wedding I could directly link to a Feng Shui adjustment. 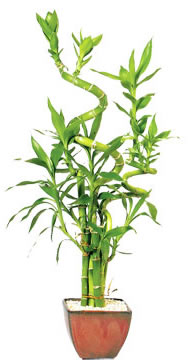 Stories like these regularly demonstrate the power of Feng Shui. It’s not that I don’t believe changes can happen from simple adjustments, it’s just that they come in such surprising ways. Much to the delight of the client, as well as me, Feng Shui brings about dreams and wishes in very interesting packages. I want to share some of the stories and outcomes I hear about so that, if there’s any doubt in your mind about using Feng Shui, you might be inspired to “bagua” something.

A few months ago I received an excited call when a client had been offered a job overseas. This was a job she had hardly dared to dream about. The offer came twenty-four hours after she had moved pictures of some dead relatives out of her Career area. In the same vein, an unemployed stock broker, who had hired me a few weeks before, received a call with a job offer while he was still in the process of cleaning out a very messy front closet in the Career area of his apartment.

I was called by a woman who was frustrated and fed up with her job in the banking business. The office politics, daily pressures and travel requirements led Melissa to feel as though she wanted a career change. She didn’t know in what direction and she was reluctant to give up her generous salary, but something had to change. We went to work in her Career area and in her Fame & Reputation area to help bring about some vision and clarity for the next step. Melissa wrote down the various suggestions I made—-like, cleaning out a disorderly pantry, re-painting an area, hanging a crystal, etc. She compiled these suggestions into a “To-Do” list, checking her duties off one by one as she got them completed. Still nothing seemed to happen. She called me frequently, surprised at the lack of change in her life, wondering if she should do something else or something more. Each time we talked I could hear the edge in her voice. Each time I would assure her things were unfolding and to trust
the process.

It wasn’t until she signed up for one of my classes that I realized that I hadn’t spoken to Melissa for several months. I was curious as to what had happened to her. When she arrived for the class, she was very excited to tell me her story. It seems that, after doing all the Feng Shui suggestions, Melissa began to get clear that her main challenge was her boss. They agreed on nothing. Often Melissa found herself having to carry out instructions or procedures that she did not feel appropriate or efficient. Her boss’ lack of organization created extra work and stress for Melissa until Melissa hated her job and everything about it.

In an unexpected shift in personnel, Melissa’s boss was moved to another division in another city. Melissa, however, anticipated with dread who her new boss might be. Several agonizing weeks went by before she was told that SHE was going to be moved into the position. She had no doubt she was up to the task, but frankly it hadn’t occurred to her that she might be considered for such a high spot.

Melissa took the job, organized the agenda, simplified the duties, and re-grouped her staff. As a result, she loves her job. She didn’t need to leave the banking world to find her pleasure and her passion. There only needed to be a little re-arranging for her to discover this. Sometimes Feng Shui changes things in a time frame that is different from ours. Melissa also got clear that the real issue was not her job, but her boss. She could then energize the aspects of her job that supported her and stop energizing the negative parts.

A man called me because he had noticed that his business had dropped off significantly since they had moved a year ago. He couldn’t explain the drop-off. The phone stopped ringing. When I looked in his home office, I noticed that his desk was sitting in the doorway with his back positioned to the door so that he could look out the window. In Feng Shui these are two very challenging situations. I suggested that we move his desk; I even offered to help him so he could see the difference. He expressed some resistance to moving the desk because he liked looking out the window while he was working, there wasn’t room to move the desk the way I was proposing, he’d have to move his computer set-up which had take considerable time for him to put together, etc., etc. His wife, however, could envision the outcome and gently encouraged him to try it for a while. We moved his desk. By the time I left the appointment, he had already warmed up to the arrangement and seemed more willing to give it a try. By the time I returned to my own office at home, he had left a message on my voice-mail to say that as he was standing in his office assessing the new layout, the phone rang. A new contract was forth coming! His business continues to prosper.

Finally, I was particularly moved by the outcome of a Feng Shui suggestion that was passed along second-hand. A client of mine (Marty) shared with me that after our appointment together, she was talking to her sister on the phone. Her sister’s husband had been in prison for over a year for writing a series of bad checks. Her sister (Lois) was left with three very small children and the house to take care of. Lois had never lived alone before and was struggling to meet the daily needs of her family. Her husband’s sentence was 2-20 years without parole—-in their opinion a punishment far exceeding the crime. Lois had just gotten word that they were going to be moving her husband to another prison 400 miles away. This meant she would hardly ever be able to see him. She called her sister Marty sobbing hysterically.

Marty calmed her down and then began to discuss with her the possibility of doing some Feng Shui in the house. Lois, a fundamental Christian, had earlier ridiculed her sister Marty for indulging in such “pagan” activities. However, now she was desperate. Marty suggested an adjustment that she and I had discussed for Marty’s bedroom—-that she hang a wind-chime in the Partnership area of the room to bring about some changes in the relationship. Lois admitted it was a long shot, but couldn’t think of anything else to do.

Three days after Lois hung the wind-chime, her husband called to say that instead of being moved 400 miles away, he was being released on parole after all. He would be home within the week! Marty assured me that she was definitely going to be sharing some suggestions with Lois and her husband for their Wealth area to assure that no bad checks would be written again!

Sharing a small number of stories I hear each week may help you better understand the possibilities that Feng Shui and the power of intention can bring into your life. As I am always looking for new stories, perhaps your dream will be the next one to come true.