28 Aug Being Inspired by Your Home: A Feng Shui Experience

Posted at 16:39h in Conversations with Your Home, Feng Shui by Carole Hyder 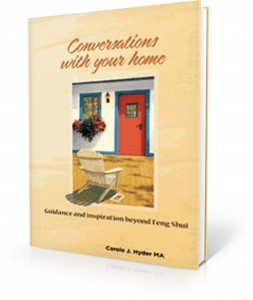 Since my book Conversations with Your Home has come out I have had readers share their experiences with me.  For some, just simply naming their home changed the relationship.  For others, learning to listen to its subtle messages was revealing.  For Beth, getting in touch with the specific archetype was the most meaningful way to connect with her home.

Beth purchased a copy of my book mainly because she was struggling with her job.  She understood that her space can be a mirror of her life and wanted to see if having a conversation with her home would offer some insights.  She named her home, took pictures of her home, wrote to her home, but it wasn’t until she discovered its specific archetype that inspiration hit.

After taking the Archetype Questionnaire included in the book, she realized she was living in an Innovator home.  This is a home that enjoys creativity, supports individuality, and doesn’t settle for second best.  Beth found this interesting because lately she was feeling exactly the opposite in her own life, specifically regarding her job.  She followed the advice in the book about how to connect with her Innovator home and decided to write her home a poem.  Years ago, Beth had several of her poems published in a literary journal, so she felt this was a creative, unique, and appropriate way to connect to the Innovator

While she was putting her poem together, she realized how much she enjoyed this kind of creative writing as opposed to her work as an accountant.  She pondered whether there was a career for her in this field and what kind of job that might be.  Beth figured that in order to follow her dreams, she would have to quit her job and its security, launch out on her own and attempt to pick up writing assignments as she could.   She dismissed the idea.  Or tried to.

For the next several weeks, Beth decided to find out whether there were any possibilities for using her inspirations as a writer.  In spare moments, she did research on the internet, made some phone calls, and wrote some letters.  She stumbled upon a greeting card company who was looking for someone to write copy a few hours a week for a new line of cards.  She could work from home yet keep her current job with its benefits since her hours would be flexible.  Within three months, Beth was producing inspired and heart-felt copy for her new employer.  This outlet not only enabled her to cope with an otherwise boring job but also inspired her to implement some creative ideas in that arena as well.

Being surrounded by a home that supported Beth’s innovative and inspired side emphasized her need to express that in some way.  It provided the platform from which to integrate innovation in her own life.  Had she lived in a different archetype home, she may still be grappling with career boredom.  But she lived with an Innovator who wouldn’t stand for anything less than creative expression.

Perhaps it’s time for you to determine what archetype your own home is holding.  It’s very possible it holds the answers to your own dilemma.

If you purchase a copy of Conversations with Your Home before September 5, 2013, you will receive a free set of cards illustrating each of the archetypes.