24 Jul WWAOD (What Would Annie Oakley Do?)

Posted at 11:10h in Feng Shui by Carole Hyder

From time to time during the course of a Feng Shui appointment, I have to address a specific question regarding the placement of a particular item. The controversy comes in when there is a couple who is divided about where to place it. Because there is so much emotional charge around this item, each partner is blind to the other’s viewpoint. They look to me to offer advice, each secretly hoping I will side with their own perspective. Sometimes it has become an issue of such paramount proportions that I can almost visibly see the tension in the air when the question comes up. The controversy is where to place the gun cabinet.

The placement of a gun cabinet divides a couple because one of them (let’s face it, usually the male) loves his guns and considers them his friends. The other is afraid of them, thinks they’re offensive and doesn’t even want them in the house. As you can imagine trying to find an amicable compromise is pretty challenging. A gun cabinet is both a helpful instrument and a horrendous weapon. The best way to help people solve the problem is to first clearly delineate where a gun cabinet does NOT belong.

A gun cabinet never, ever, ever, another ever belongs in the bedroom. It has too much yang energy to be placed in a room where sleep, intimacy, and healing should occur. I realize it can be monitored in there so that kids don’t get into trouble. I realize it may be in a beautiful cabinet that could be an expensive piece of furniture. The answer is still no. Someone will not sleep well in that room and that will typically be the person who is not connected in any way to those guns. Resentment will build up and make the situation worse. 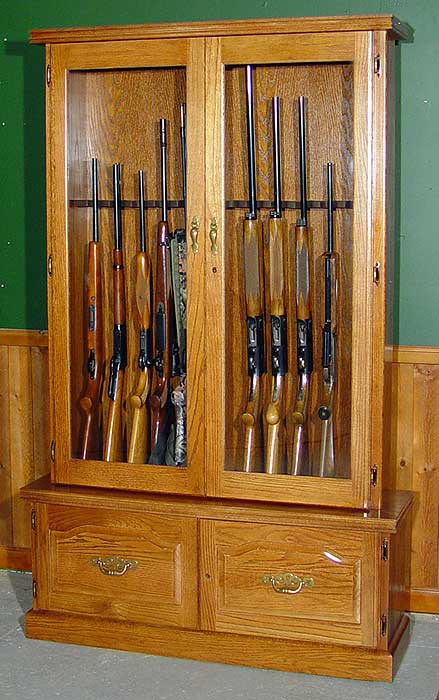 The second place a gun cabinet should not be placed is near the front door. In Feng Shui, the first thing someone sees when they enter a space determines the energy of the people who live there. For instance, if someone sees a piano when first entering, visitors can assume people are musical. Obviously if the piano is not used, the message is a mixed one. If the first thing someone sees is a bathroom, then energy is very draining, not only for people who visit but also for those who live in the house. If books are the first thing people see when entering someone’s home, then visitors will assume they’re well-read. If visitors first see a gun cabinet, the message can be entirely different than intended by the homeowners. Guns are explosive and aggressive. They just do not appropriately welcome someone into a home.

On the other hand, I’ve seen them nicely integrated into a den, family room, rec room, even a home office. I’ve also seen them placed in a guest room which is fine if you don’t want too many people to stay over! Even if the cabinet has a solid wood door so that the guns are not actually seen, it still holds that aggressive energy and should be carefully placed in the home for minimal negative impact.