Posted at 17:18h in Feng Shui by Carole Hyder

Someone contacted me with a question about building a floating home and asked whether this was “good” Feng Shui or not, since fast-moving water would be flowing around the house at all times. Before answering, I might add this same question would apply to those who live on house-boats.  This would also apply to those people who build out over the water with their home on stilts, so they’re not actually ON water but are hovering over it.

Let’s start with a simple answer:  no.  Being surrounded by all the damp yin energy of the water can elicit illness, insecurity, and overwhelm.  Water is a receptive medium so, in doing its job, it takes away energy.  Obviously this could be to the detriment of the people living on it.  This doesn’t apply if people occasionally live on their boat or occasionally stay at their weekend home which is dangling over a river.  In the short term, there probably won’t be any negative issues. 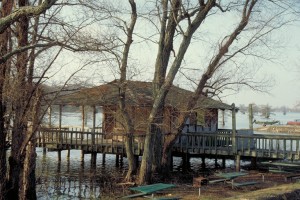 However, I was asked about a permanent home, one where they intend to live all the time.  My answer is to proceed with caution.  That said, there typically aren’t simple answers to questions in Feng Shui.  For instance, my dentist lives on a house boat and positively loves it.  He has been living on it for about five years and has learned how to adapt to the sea-leg syndrome when he gets off each morning to go drill teeth.  Furthermore, he finds the gentle rocking of the boat comforting and soothing.  Let me say, though, he is a man whose ch’i is strong and focused, he has a great attitude, travels, is seldom sick.  He works out, he has a hilarious sense of humor, and everybody loves him.  A man like that can handle living on a boat.

The issue with living on/over water becomes critical when someone vulnerable decides to take on the challenge.  In many cases, a person won’t know they’re vulnerable until they get there and then after a period of time becomes afflicted with arthritis or lung issues or something else.  The situation has a potential for bringing up issues that wouldn’t normally appear in more stable conditions.

Not only is the over-abundance of water a detriment, but a person lacks a basic connection to earth and to a solid foundation if they’re living on water. There’s not enough stability. Yes, they may work somewhere “on land” all day, but it’s the sleeping thing, the dream-time thing, the balance thing that gets disturbed at night.  For the record, I’m totally aware that Frank Lloyd Wright built a house over water, but he also ignored plenty of other Feng Shui principles along the way.

Although I pride myself on all my experience, the years of wisdom I bring to clients, along with solid foundational training, clients often decide to do what they want anyway.  In that case, for my dear questioner, if you still want to proceed with your plans to build a house on the water, please see that you have four stones or rocks from the nearby land and place them in the four corners of the house—-inside the walls would be best, otherwise, sitting in the corners after you’ve moved in will suffice.  Then, be sure to keep your ch’i up and your anxiety down.