21 Feb Is it a Fire-vision or a Tele-place? The Feng Shui of Stacking a TV Over a Fireplace

As televisions have become more streamlined and more important in people’s lives, their presence in a home has become more paramount. They no longer have to take up a lot of space so they can go in more places than before. Furthermore, as the world gets smaller, we are more focused on global affairs. Both are arguments for having a TV centrally located. When the skinny plasma televisions came out a few years ago, someone came up with the idea of hanging them on a wall—–even above a fireplace.

Let’s examine the importance of the fireplace. Considered the central hub of a home for centuries (before furnaces gave us the freedom to hang out in other parts of the home without freezing), a fireplace was a spot where friends and family gathered. It provided warmth, light, and was often the place where food was cooked. Although we don’t need a fireplace to do any of those tasks anymore, it still holds importance in a room. Furniture should be arranged around a fireplace; it should not be in competition with other features of the room—-like a television.

For years, I was advising people to place their television set next to the fireplace to simplify furniture arrangements, keep the fireplace as the central focus of the room, and yet still be able to watch your favorite programs. Hanging televisions on the wall above a fireplace became a great solution to this ping-pong issue that was happening in many living rooms——fireplace on one side; TV on the other. Unifying these two features simplified the issue and calmed the space down, not to mention solve some furniture arrangement problems. 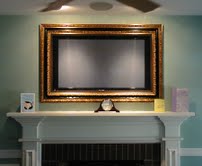 Although hanging a TV above the fireplace presents no problems, it’s still a good idea to “disguise” the television when it’s not in use with cabinet – doors, a roll-down shade, or even artwork that fits over the front of the screen.  Sometimes the screen itself turns into a painting when it’s not in use. One home I visited had installed a television above their fireplace that, when not in use, looked like a mirror. A nice balance for the fire below.

Having a TV over a fireplace isn’t a Feng Shui issue if the TV is “managed” appropriately. We do not endorse or recommend that the television become a constant member of the family. There was a time when the fireplace encouraged conversation among those who were gathered around. The television, however, does the conversing for you, eliminating good quality family time. Rather than listening to the TV all day, you may want to listen to the fireplace. Better quality of conversation all levels!