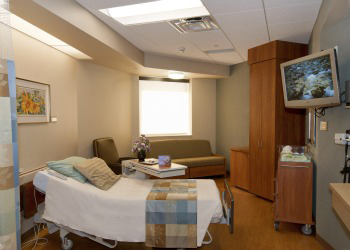 21 Mar Does a TV in the Hospital Room Help or Hurt the Patient’s Healing?

Working as a Feng Shui consultant in various hospitals over the years, I have been cognizant that there are specific life-critical systems in place near each hospital bed.  In an emergency, an oxygen supply, medical ventilators, monitoring capabilities are all crucial to helping people heal.

Along with all that, the patient is also influenced by the presence of a television.  Typically mounted on the wall, the TV looms over the patient waiting for the chance to entertain or inform.  A remote allows the patient to decide what to watch on their television and when.

But is this a good idea?

In Feng Shui, television sets are a modern invention that didn’t have to be taken into consideration a few hundred years ago.  In homes, I suggest that a television be placed in an armoire of entertainment center where doors can close off its influence.

And now that a TV in a hospital room is expected, they require attention in terms of their healing impact.

Here are some “Pros” and “Cons” to the TV question based on a Feng Shui approach:

I am sure televisions will not be removed from hospital rooms any time soon.  So here are my two suggestions to make sure they are a healing tool and not just an energy drain.

Feng Shui subscribes to the concept of flow and movement and everything in moderation—-even watching television from a hospital bed.