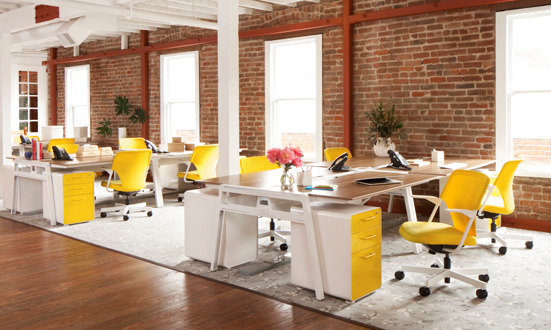 Some of us (of a certain age) remember the television show called “WKRP in Cincinnati,” about a struggling radio station. One of the characters on the show was a fussy and fidgety guy named Les Nessman, a reporter and announcer for the station.

It annoyed him that all the desks were stuck in one large room with no walls, so he put masking tape on the floor to delineate what he determined was his own office area. It provided a lot of humorous moments when people had to “knock” on an invisible door to talk to him or when he was concerned he hadn’t “locked up” before leaving for the day. All that being said, Les was reacting to an office situation that is less-than-ideal—–one with no walls, no boundaries.

These open systems have probably survived based on a theory that everyone will work as a team. If there are no physical separations, then perhaps there will be no separations between people enabling them to work together on common goals and projects. That idea has some merit to it but, as many people will attest, everyone else gets in on the troubles their kid is causing at school and what their doc is saying about a persistent rash.

Is the open office system really a good idea from a Feng Shui perspective?  Here are 3 ways to assure that this office layout isn’t detracting from production, creativity, and profitability.

1. Provide adequate storage. So that the whole place doesn’t look like a field of papers, everyone should have ample place in which to store, file, and access their projects. If desks can be kept more clear and open, it allows for employees to be creative with their space. A piece of sculpture or flowers or a plant or a decorative lamp can all add diversity to an otherwise open expanse of same-ness.

2. Provide a fake barrier. Whether tall plants or movable screens, each employee should have the option of being able to feel a bit of privacy without destroying the open system concept. This way everyone has the option of being “out of sight” even if just for a few moments of reprieve from continual exposure to the eyes and ears of co-workers. Placed on either side of their chair or along the back half of their office area, a few plants or a screen can make all the difference to a person’s ability to withdraw when needed yet still be part of the team.

3. Provide a high-back chair. In Feng Shui, there’s an important concept about having protection from the back. In topography, this is seen when a village is built near the foot of a mountain—the mountain provides protection from enemies coming from behind as well as from strong winds. A headboard on a bed provides protection and support as well. A tall-back chair holds the same idea. Feeling like there’s someone or something to lean on, both figuratively and literally, will help an employee be a productive part of the office, making clear and focused decisions.

So, to avoid the Nessman syndrome, make sure your open system has made allowances for those who work best when they can take the occasional break from everyone else and, yet, not leave their desk—where they can be an individual and also a team member—-where they can feel creative as well as co-creative—-productive as well as a professional partner.